On Feb 13, 2018 Micro Focus published a compact high level overview video about the current ALM Octane offering. If you haven’t touched on ALM Octane before the time on this video is well spent.

On September 1, 2017 HPE Software became part of Micro Focus. The combined company is currently the 7th largest pure-play software company on the world.

With this merger Micro Focus currently provides a rich set of agile development and planning products. To name a few:

It will be interesting to see the roadmap of these product in the new Micro Focus context.

On September 7, 2016, Hewlett Packard Enterprise and Micro Focus announced their intention to spin-off HPE Software and merge it with Micro Focus.

The combined offering will present a powerful portfolio of software solutions. A recent blog post on MakingOfSoftware outlines the current facts and draws some conclusions. Find out more here: HPE and Micro Focus Intend to Spin-Merge HPE’s Software Business

In my previous post “a brief look into ALM NG” I provided some details about the new technology for ALM that HPE had in beta.

On June 1st, 2016 Kelly Emo from HPE blogged about the new product. The official announcement from HPE got published here the same day.

According to HPE availability of the product is as follows “HPE ALM Octane is available as a cloud-delivered service starting today. On-premise HPE ALM Octane installations will be available later in 2016. Current HPE ALM and HPE Quality Center enterprise customers on support are entitled to the new offering as part of their active support contract. “

Interestingly, it has been made available as part of a minor release of the existing HP ALM product a couple of days ago with release number 12.53.

“We have expanded the ALM experience by introducing HPE ALM Octane, a separate platform that is tuned and designed for high-velocity, lean and Agile teams. ALM Octane integrates with both HPE Agile Manager and the traditional ALM .net platform, allowing teams to easily share assets and report across projects. For details, see Octane Help Center.”

HPE will provide more information about Octane on the upcoming Discover 2016 conference in Las Vegas June 7-9 2016.

On March 19 HPE announced the upcoming availability of its “Next Generation ALM” (NG ALM) product as a beta version. In a previous post I shortly described HPE’s intended direction to support bimodal IT with this offering.

Since then I had the chance to look up the beta version. In this post I describe some of my findings. The product has so many areas that I need to focus on some of the highlights. It is not the goal of this blog to provide a complete overview.

Be aware that the product is still in a state of flux, so features might have already changed by the time of this writing. Furthermore, it is safe to assume that the released product will look different (and this will definitely be the case for the product name).

According to HPE NG ALM targets the modern way of developing software products from the very beginning until delivery. This way the entire value stream for product generation is covered.

Notice that there is no “testing” entry; more about that later.

For a given software product those entities are related to each other. NG ALM utilizes a couple of concepts to express these relationships: Hierarchies, relationships, and tagging.  I will describe more about those within the specific product area.

The dashboard provides aggregated information about various aspects of product generation. Individual widgets can be configured based on user needs. Similar to widgets available in HPE’s Agile Manager additional data is provided when hovering over the graphics as illustrated in the screenshot below. 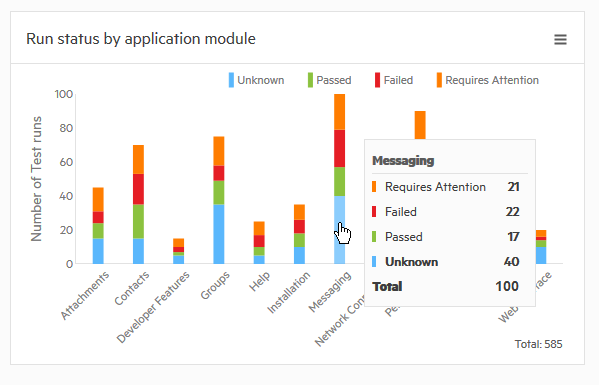 NG ALM allows to perform detailed analysis of this data via drill down capabilities that are accessible directly from these graphs. 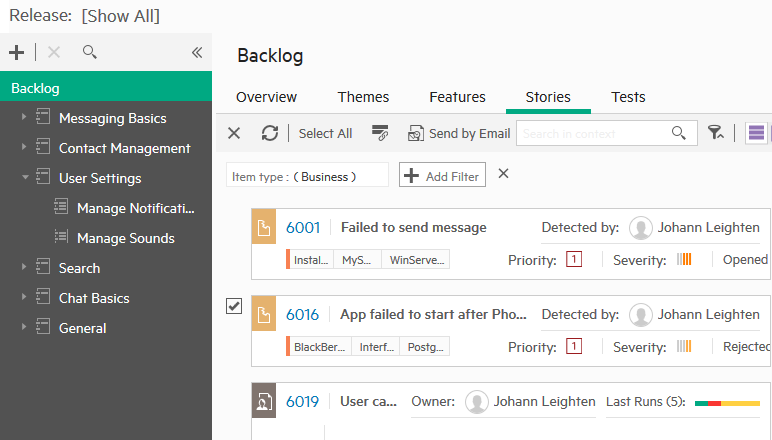 Themes and Features are organized hierarchically. Themes provide the highest level of organization. They represent large grained application areas that can be described by a set of individual features underneath them. Features will have stories attached that implement the feature and tests to validate the stories. Defects may be also located at the feature or story level. NG ALM utilizes freely definable tags to support efficient and effective work environments. They are optionally visible on the right side of the screen and can be turned on and off via simple clicks. Tagging and filtering is nicely grouped together and can be used in combination.

Stories will be tested thus having a relationship to test entities. During the life cycle of a software product tests will be conducted often. A user will have to create the relationship between the user story and test, NG ALM will automatically create relationships between tests and individual runs of those tests. For analysis purposes these relationships can be viewed at in a graphical manner. 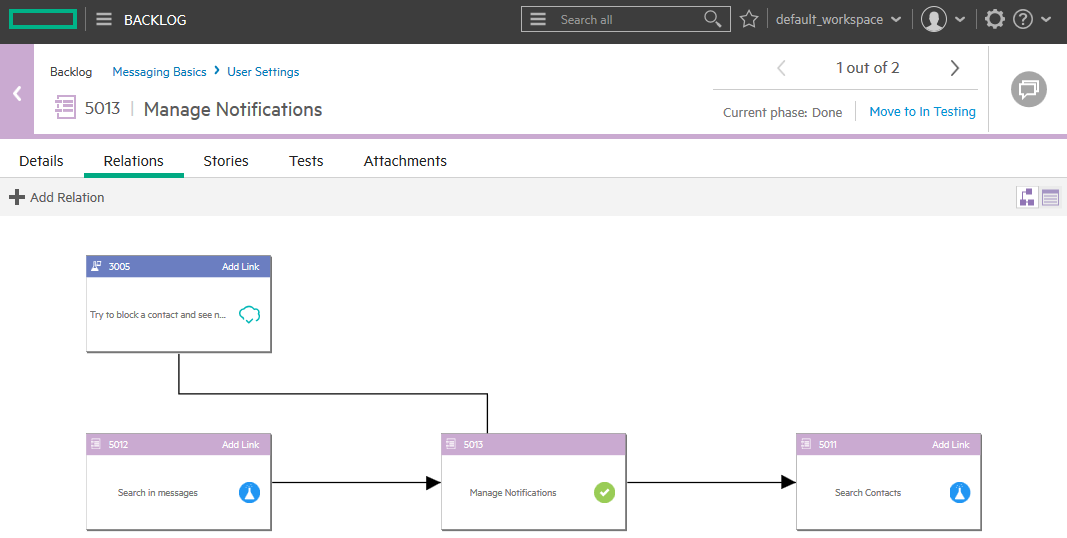 These graphs provide direct access to details of the displayed elements if desired.

Besides manual tests NG ALM provides a new way into automated testing by utilizing the Gherkin framework. Gherkin is a business readable, Domain Specific Language (DSL) that lets you describe software behavior without detailing how that behavior is implemented. 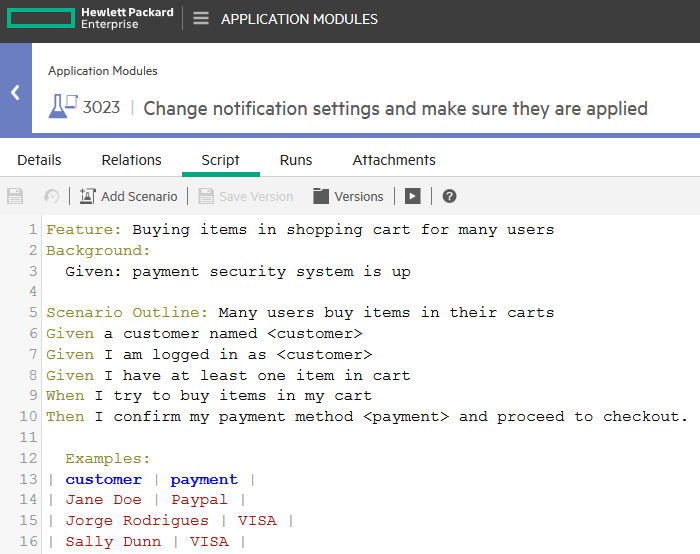 Gherkin became prominent in recent years in context with agile methods that favor a high degree of test automation.

Gherkin tests are handled like development artifacts and stored in a configuration management system. Each time a developer finishes coding an automated build can be triggered along with automated tests. This development approach results in fast-paced and high quality software production.

The defects area delivers pretty much what you would expect from it: Views into the defects of a software product from various use aspects. Modern filtering, tagging and grouping is supported within that module. 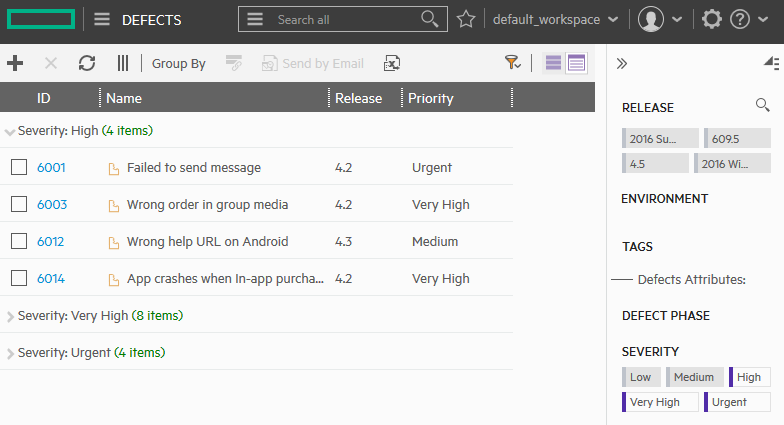 The pipeline area brings it all together. It is a direct linkage into the build, test and deploy environment. NG ALM provides direct control of those build processes. Out of the box it provides management capabilities of the Jenkins environment.

With NG ALM HPE provides a modern way to customize the workflow. No more VBA scripting as there is in the current ALM product. Phases and transitions can be added graphically as shown in the following screenshot:

Automatic assignment of tests to application areas can be configured using test assignment rules. Each time a new test matches such a description the test will be automatically assigned to the specified test area.

NG ALM provides an impressive new approach of HPE into the modern way of developing software. The product can be used with any modern browser which is a big advantage over the existing HPE ALM product. HPE also provides several integrations / synchronizations into its flagship products to allow immediate benefits for early adopters.

New key functionalities are the test automation framework Gherkin and the pipeline approach. They address the move into an agile way of developing software and managing the DevOps challenge.

The product is in a very early phase, therefore customers should expect quite some functionality additions. Specifically, I see the following areas that need to be addressed:

Conceptually, there are questions too:

I will closely monitor how HPE is following up on those challenges and other feedback from the customer community. Stay tuned for more exciting news.

Update on June 1, 2016: The product is released and got the official name HPE ALM Octane.

Links to HPE sources about the new beta version:

On March 19, 2016 HPE has posted two new videos on the YouTube channel of HPE Software about the upcoming beta phase of the product “Next Generation ALM”.

This product is a fully web based ALM solution that targets the enterprise environment. According to HPE it will scale to thousands of users supporting the Scaled Agile Framework (SAFe).

It is a completely new developed product that addresses the bimodal challenges in IT departments. Bimodal IT as defined by Gartner “is the practice of managing two separate, coherent modes of IT delivery, one focused on stability and the other on agility. Mode 1 is traditional and sequential, emphasizing safety and accuracy. Mode 2 is exploratory and nonlinear, emphasizing agility and speed.” HPE currently addresses mode 1 with the existing HPE ALM solution. The “Next Gen ALM” targets mode 2.

On March 22 HPE provided a webinar to the Vivit community with the title: HPE ALM Beta

Within that seminar Vandan Nayak Product Manager from HPE announced the start of public beta for March 24, 2016.
The Website for registration is: https://saas.hpe.com/signup/try/alm-beta
The on premise availability for the public beta is scheduled for April 4, 2016.

HPE starts an interesting journey with the “Next Gen ALM” product approach. Watch out for more insights about HPE’s move towards the agile future at agileQC.net in the upcoming weeks.

Raffi Margaliot – senior vice president of application delivery management (ADM) at Hewlett Packard Enterprise (HPE) – provided  major insights into the future of app delivery at HPE’s Discover 2015 conference in London. On stage he had not only an external consultant to talk about the challenges for future app development and delivery, but also top managers of HPE’s application delivery management organization.

Later on (at 40:35 min) Udi Weinberg the QA manager of ADM provided an additional perspective of HPE’s agile development approach by filling in the quality assurance view.

The full session is available on YouTube. In case you are at a hurry and just want to look at Ruli’s talk, then start looking at video position 28:00 min.

HPE Video from Discover 2015 in London about app delivery:

Availability of features depend on edition. A quick overview of features by edition is available at the Application Lifecycle Management Help Center: ALM Editions

The feature matrix there provides a comprehensive overview about the capabilities of the five editions. However, for companies newly interested in HP ALM, it still might be a challenge to find out which edition is the right one for them.

In case you need guidance feel free to contact us.

HP has established a central online information repository with detailed information about HP ALM. It’s called “Application Lifecycle Management Help Center”. Once you access it via the URL: Go to HP ALM Help Center you will see the Help Center loaded with the latest release information (in this case 12.50)

Starting from this page you will find an excellent collection of information targeted at HP ALM end users and administrators. Moreover, you also get information about previous releases.

For quite some time HP argued that HP Agile Manager will be as SaaS solution exclusively. For some companies this is a concern, as they consider requirements intellectual property assets, which shouldn’t be stored outside a company’s network. Now it seems that it is available as a solution that can be stored inside a company’s network. From the blogpost about HP Agile Manger 2.0:

“… You now have a choice in how you buy and use HP Agile Manager. Now you can use it as a full-SaaS solution with unparalleled security as well as reduced administration and upgrade costs, or you can choose to buy on-premise for full control of the application.”

Seems that HP has heard the voice of the customer. However, the information is not widely spread, almost secret. Nothing can be found on the portal pronq, which is the official place to shop for HP Agile Manager.